THINGS TO DO IN MUNICH

Munich is an excellent destination to visit for a weekend or several days. The city has a lot to offer in terms of art, culture and shopping. In addition, there is a wide and diverse range of (gay) entertainment. From laid back bars, to the latest dance parties, Munich has it all. The Munich gay scene has its origins in the Glockenbachviertel district, here you will find most of Munich’s gay venues. The Hans-Sachs-Strasse in particular is a very nice street packed with boutiques, cafes and restaurants. In this street an annual gay street fair is organized.

HOTELS FOR GAYS IN MUNICH

The gay-friendly Hotel Deutsche Eiche is located in the city center of Munich. There is also a popular gay sauna in the hotel. From the rooftop terrace you have a beautiful view of Munich. The spacious rooms are stylishly decorated, the reception is 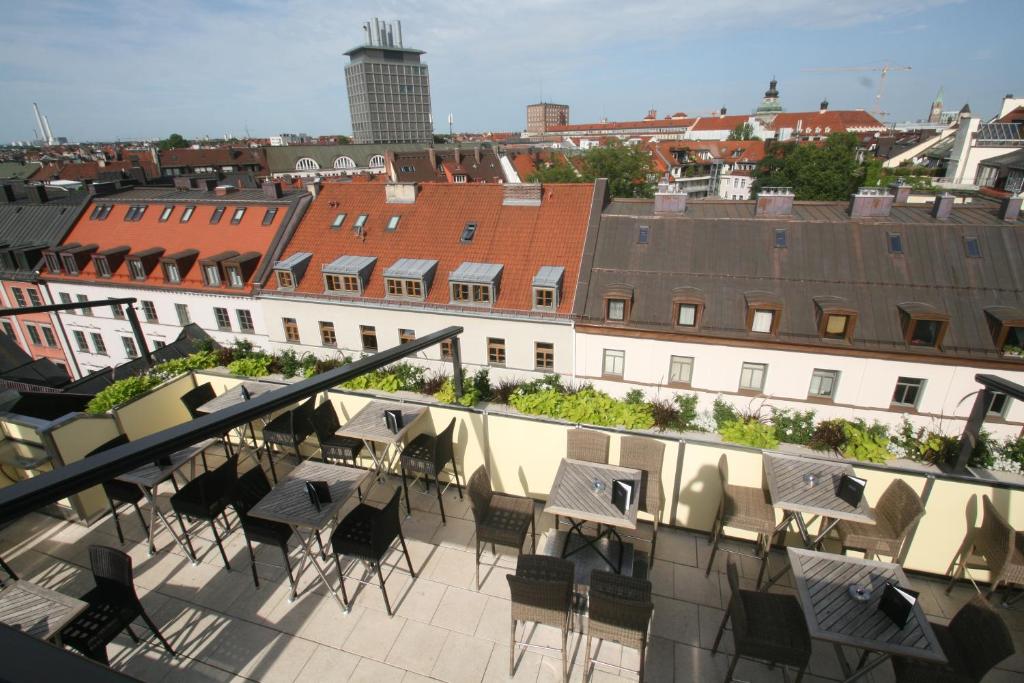 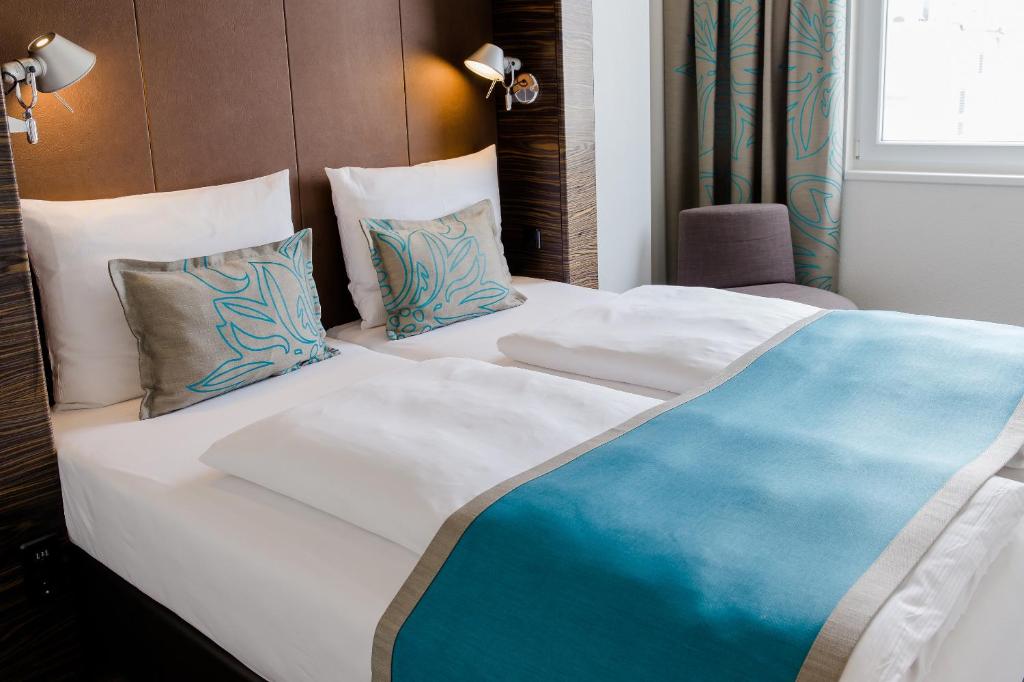 Motel One is located at the Sendlinger Tor gate, in the old town of Munich. The motel was built in 2009, has a turquoise interior and stylishly decorated rooms. Both the lounge, where you can enjoy a drink and a snack, and the reception are open 24 hours a day. You can also have breakfast in the breakfast cafe or have a drink at the bar. Motel One München-Sendlinger Tor is within walking distance
MORE INFO BOOK NOW € 548 per night
8.9 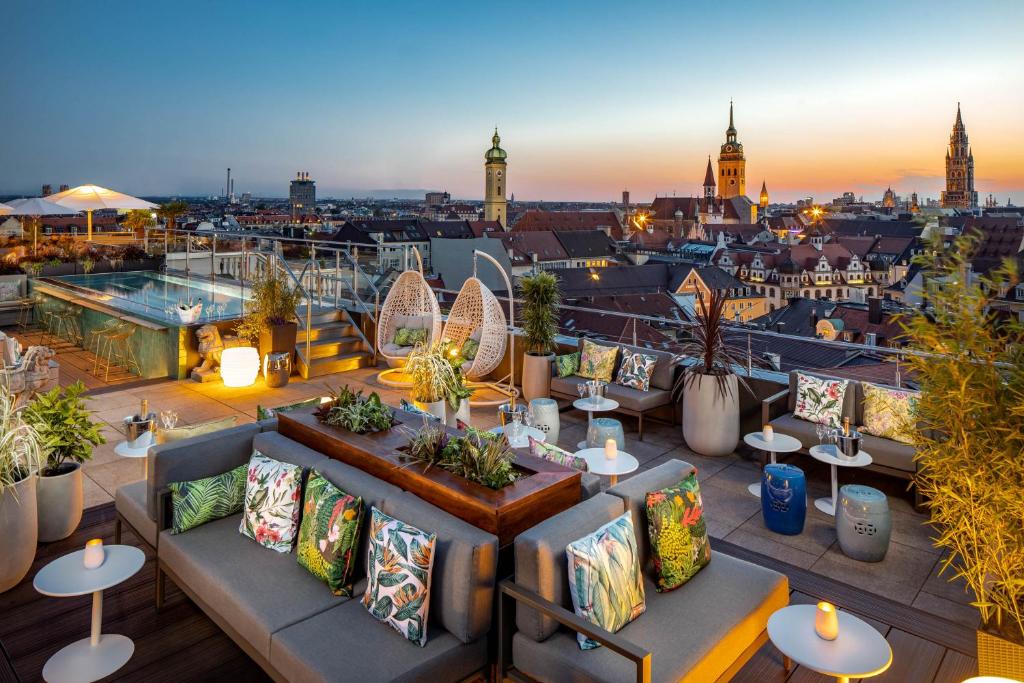 The 5-star Mandarin Oriental is located in the heart of Munich's old town. The rooms in the hotel are luxurious, fully equipped and have a mix of Eastern and German decoration. The Mandarin Oriental features a heated swimming pool, a Finnish sauna and a Turkish steam bath as well as fitness facilities and you can enjoy special dishes at the Matsuhisa restaurant. Within walking distance you will fi
MORE INFO BOOK NOW € 229 per night
8.2 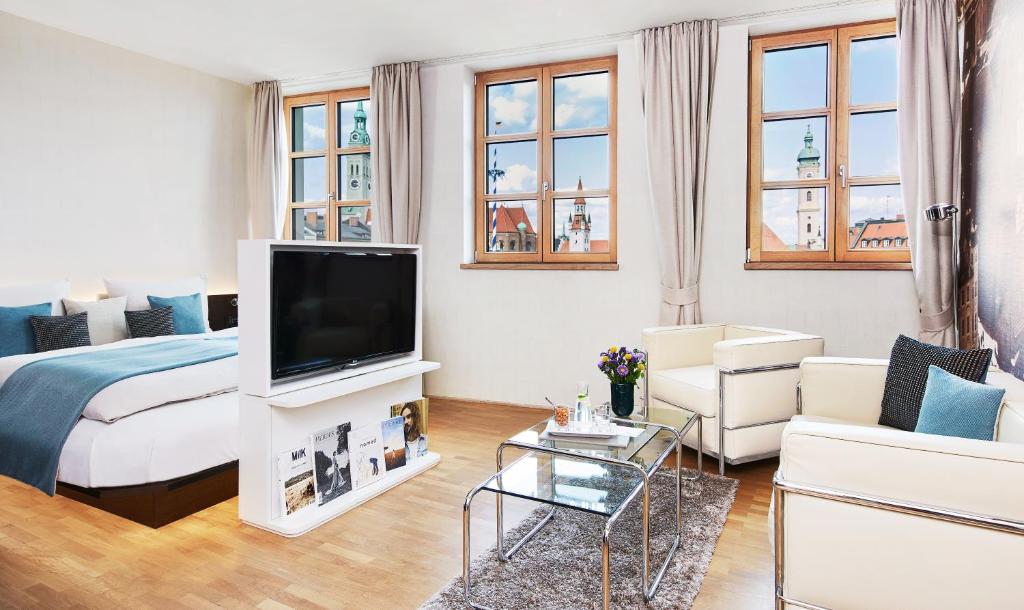 Next to the historic Viktualienmarkt, in the heart of Munich and within walking distance of the Marienplatz, you will find the Living Hotel. Facilities of the hotel include a gym, airport shuttle services and a 24-hours reception. The staff is helpful and has knowledge of the city. The rooms of the hotel are elegantly decorated. Every morning you can enjoy a buffet breakfast. There are many cafés
MORE INFO BOOK NOW € 185 per night
8.5 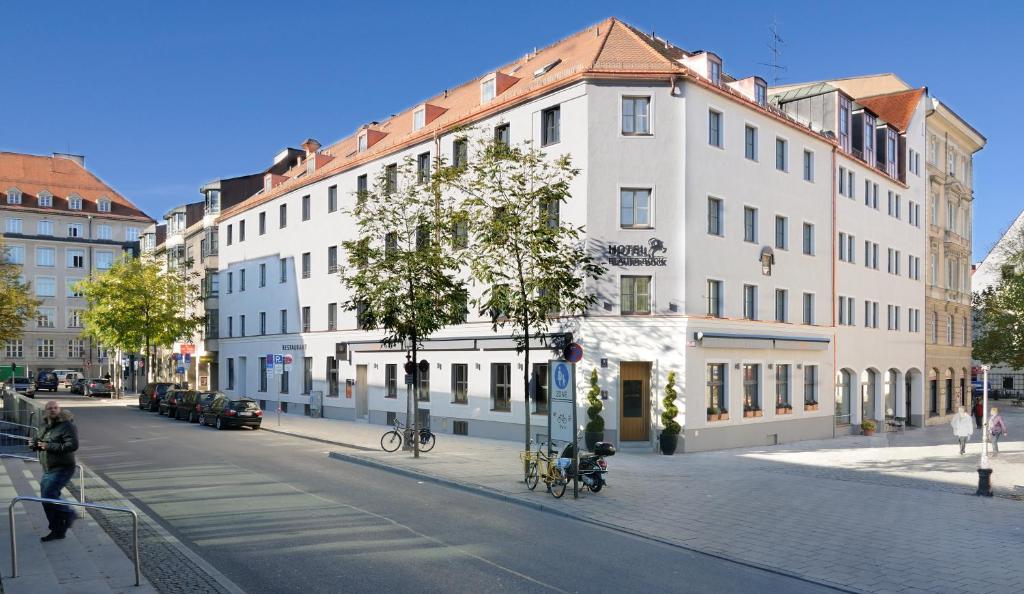 Hotel Blauer Block is set in a historic building in the city center of Munich. The rooms are modern and offer views of the courtyard or the old town of Munich. The hotel has a restaurant, where you can enjoy a breakfast buffet every morning. In the afternoon and evening the restaurant serves local dishes. There is also a bar where you can have a drink. The famous Hofbräuhaus beer brewery is a kil
MORE INFO BOOK NOW € 142 per night
7.9 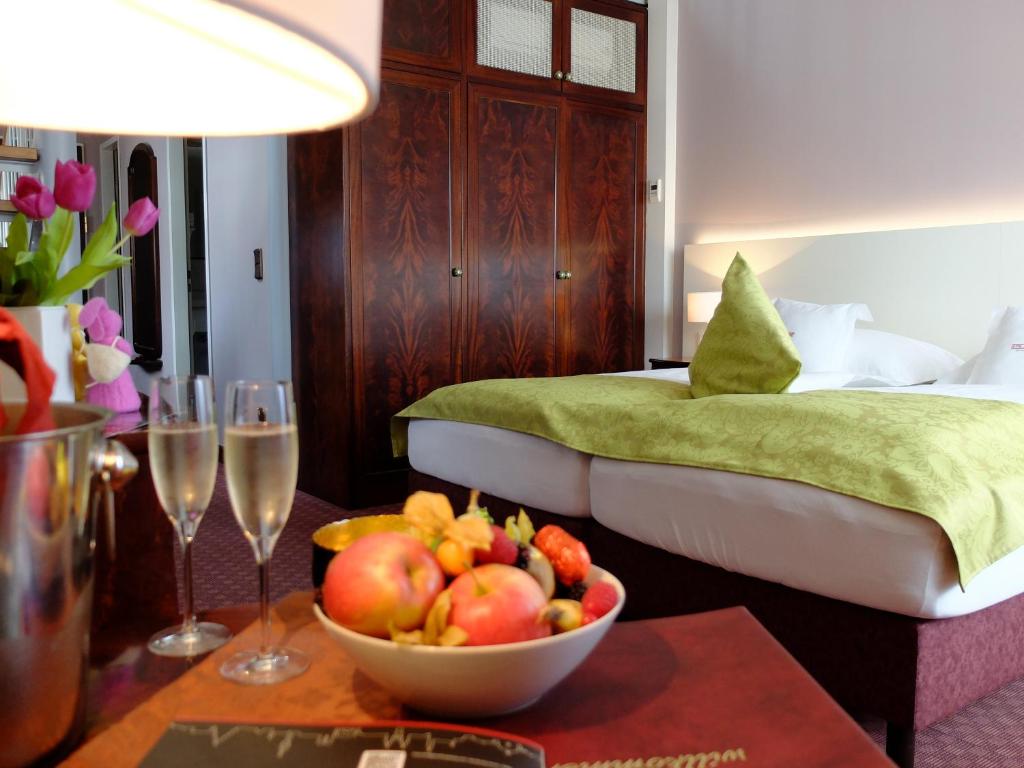 Hotel Exquisit is located downtown Munich. The hotel offers rooms with a classic interior, you can make use of a sauna and every day a tasty German breakfast buffet is served. For a drink you can go to the bar and in the evening you can enjoy excellent dishes in the restaurant of Hotel Exquisit. The hotel has helpful staff that can tell you interesting facts about Munich. Public transport can be r
MORE INFO BOOK NOW € 260 per night
7.9 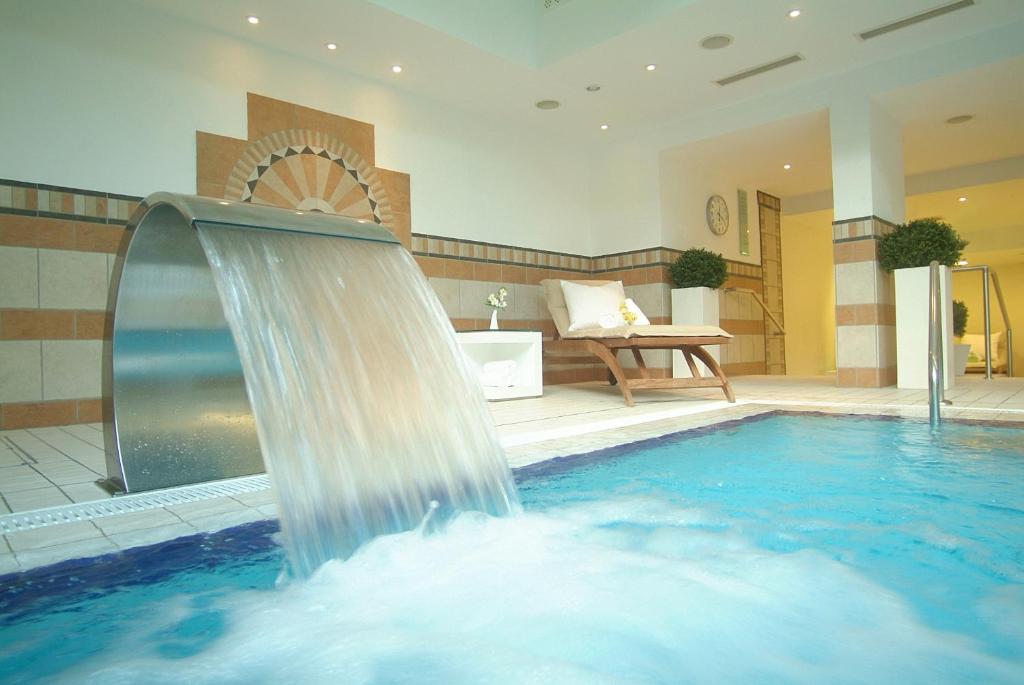 The stylish Hilton Munich Park hotel is located near the English Garden in Munich. The hotel offers elegant rooms with beautiful views, a gym, a swimming pool and a spa. In the morning a delicious breakfast is served, in the hotel's restaurant you can enjoy an international dishes and in the lounge you can relax after a busy day of sightseeing and order a drink and some snacks. Another very conven
MORE INFO BOOK NOW € 74 per night
8.4 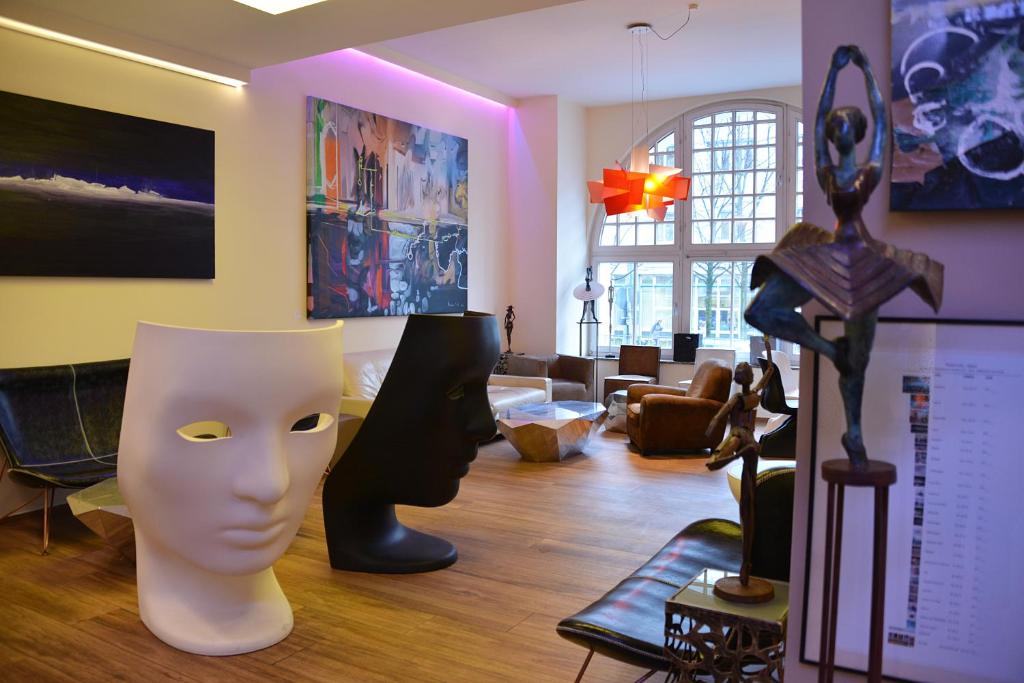 The Arthotel München is situated within walking distance of the main train station of Munich. The hotel has spacious, well-equipped rooms which are decorated with pop art. Every day you can enjoy in the morning a breakfast buffet and in the evening a drink and snacks. The reception is available 24 hours a day. The staff is friendly and can provide you with information about the city. From the Art
MORE INFO BOOK NOW € 74 per night
8.1 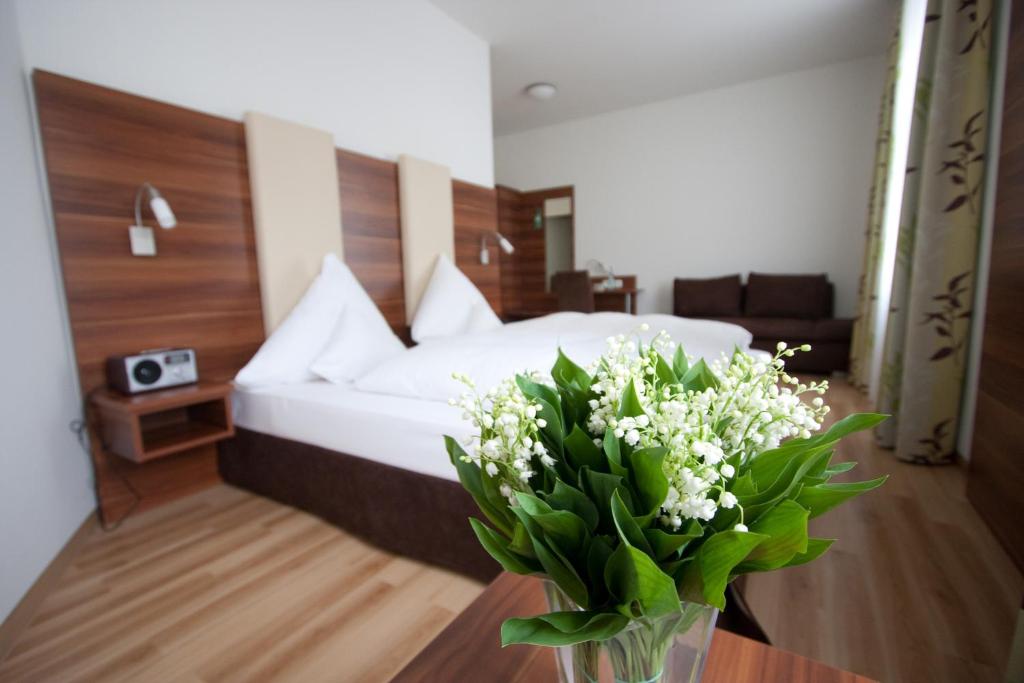 Hotel am Viktualienmarkt is located in the city center of Munich, a few minutes' walk from the Viktualienmarkt and the Marienplatz. The family-run hotel has modern, well designed rooms and a friendly staff that is more than willing to provide you with information about the city. Both the subway and the tram are easily accessible on foot. The Residence Theater is half a kilometer away from the hote
MORE INFO BOOK NOW € 68 per night
8.0 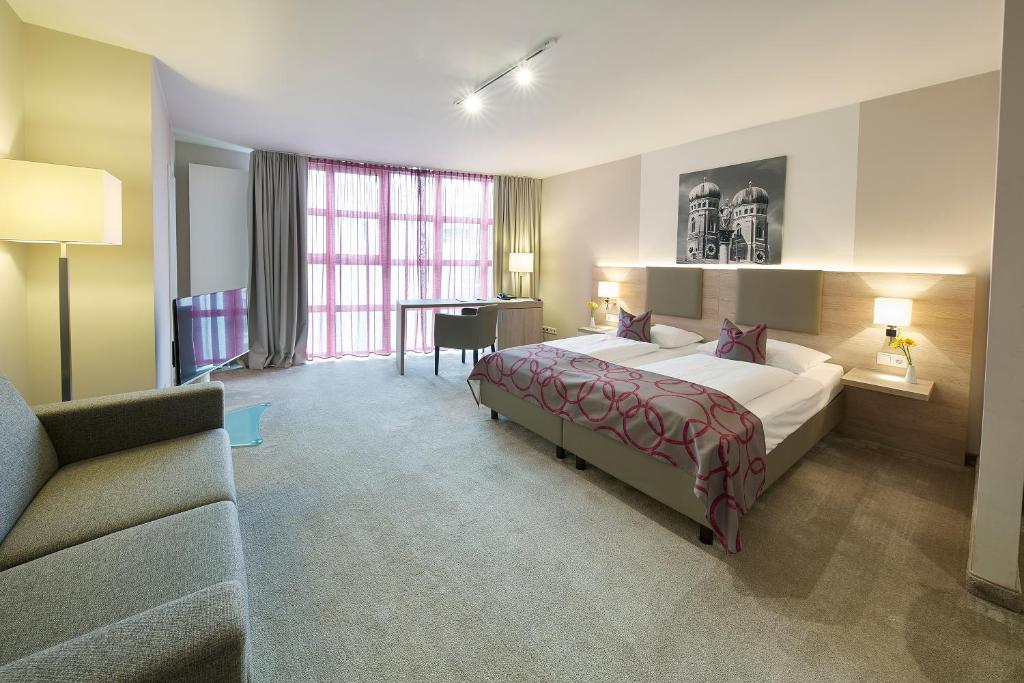 A few minutes' walk from subway station Theresienwiese you will find GHOTEL hotel & living München-City. The hotel has a rooftop terrace with beautiful views of the city of Munich. If the weather allows it, you can also have your breakfast on this rooftop terrace. The staff of the hotel is very helpful and has a lot of knowledge of the activities and sights of the city. The main train station is