THINGS TO DO IN MYKONOS

Mykonos is one of the most popular gay destinations in Europe and, together with Ibiza and Gran Canaria, one of the most popular islands in Europe. The gay scene is mainly situated around the old port of Mykonos Town. There are many beaches on Mykonos of which Elia Beach is the most famous. When finding a hotel, it is important to know what wishes you have. The rooms and bathrooms are generally on the small side and especially in the high season quite pricy. We have selected a number of hotels located near the Old Port, some close to Elia and Agrari Beach and one gay only hotel.

HOTELS FOR GAYS IN MYKONOS

Myconian Utopia Resort is an excellent choice for your stay on Mykonos. This hotel is situated, unlike many other hotels, close to Elia Beach. The downside of this great location is that it will take you around 25 minutes to drive to the city center 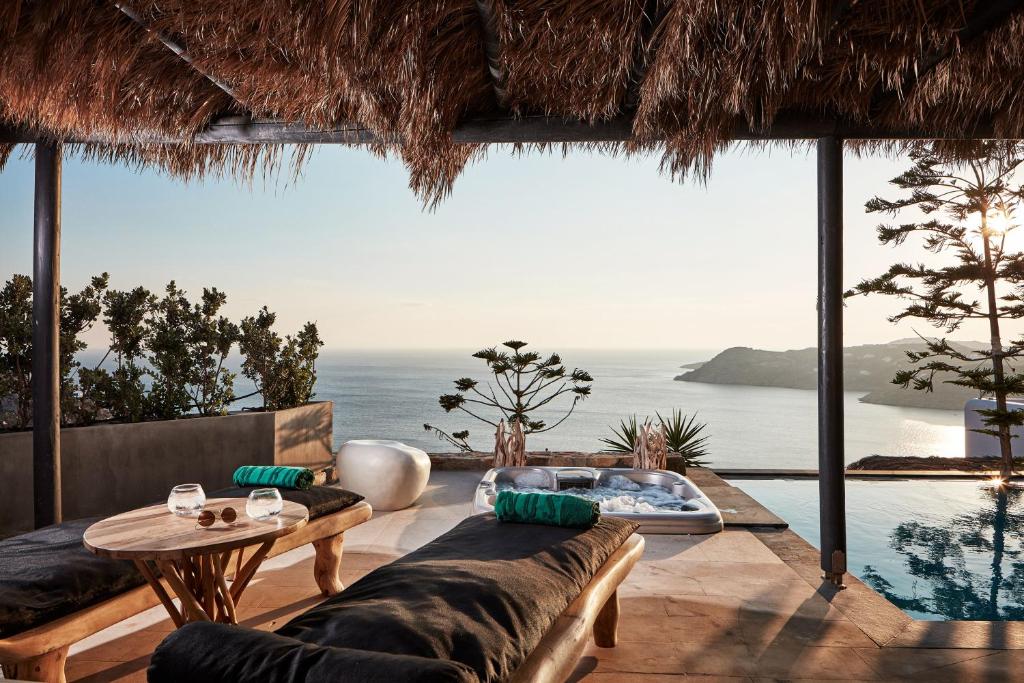 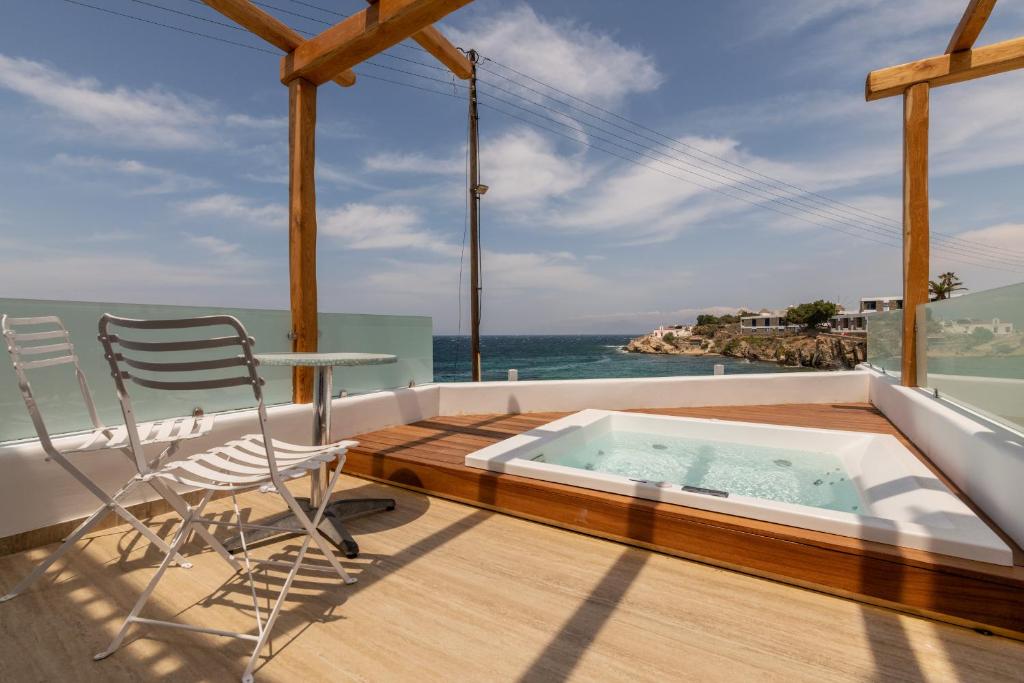 Poseidon Hotel Suites is an affordable accommodation at a central location on Mykonos. The hotel is highly appreciated by its guests due to the very friendly staff, the beautiful views over the sea and the famous Mykonos wind mills and the excellent location close to the beach and center of Mykonos Town. The hotel offers individually decorated rooms with private balconies, an outdoor swimming pool
MORE INFO BOOK NOW € 106 per night
9.1 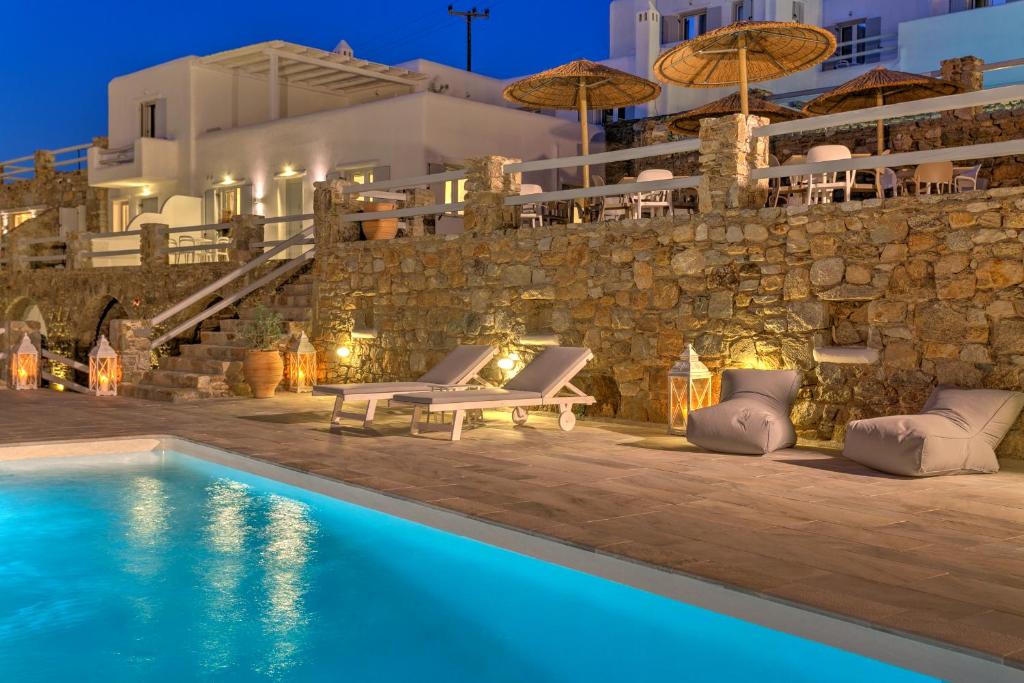 Senses Luxury Villas & Suites is situated around 700 meters from, the popular gay area of Elia Beach, (nude beach). The less crowded Agrari Beach is also around 700 meters from the apartments and to the center of Mykonos Town is a 20-minute drive. The hotel offers apartments with 1 up to 4 bedrooms. The most luxurious apartments even have a private swimming pool. In addition, Senses Luxury Villas
MORE INFO BOOK NOW € 50 per night
8.4 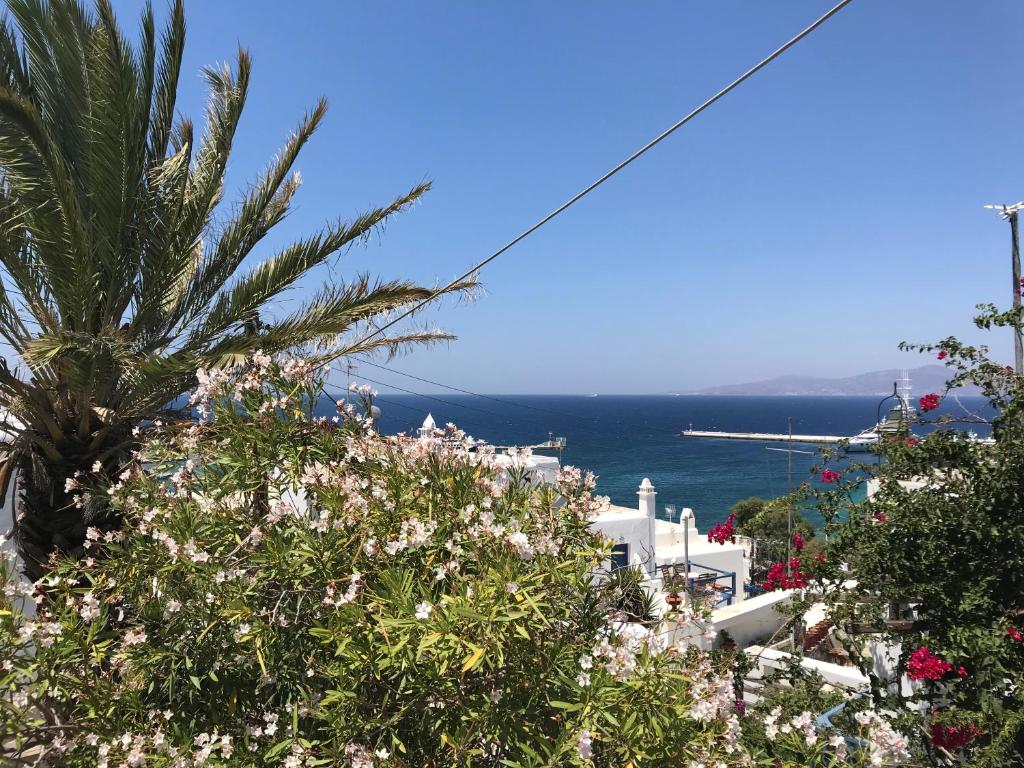 Rania Apartments Studios & Suites is a small hotel in the city center of Mykonos Town. From the hotel, it is only a 5-minute walk to both the nearest beach and the Old Port of Mykonos. Elysium's famous Gay Sunset Bar is less wide than a 15 minute walk from the accommodation. Rania Apartments Studios & Suites offers a variety of rooms, 5 suites and 15 rooms. The smallest is suitable for 1 person an
MORE INFO BOOK NOW € 216 per night
7.9 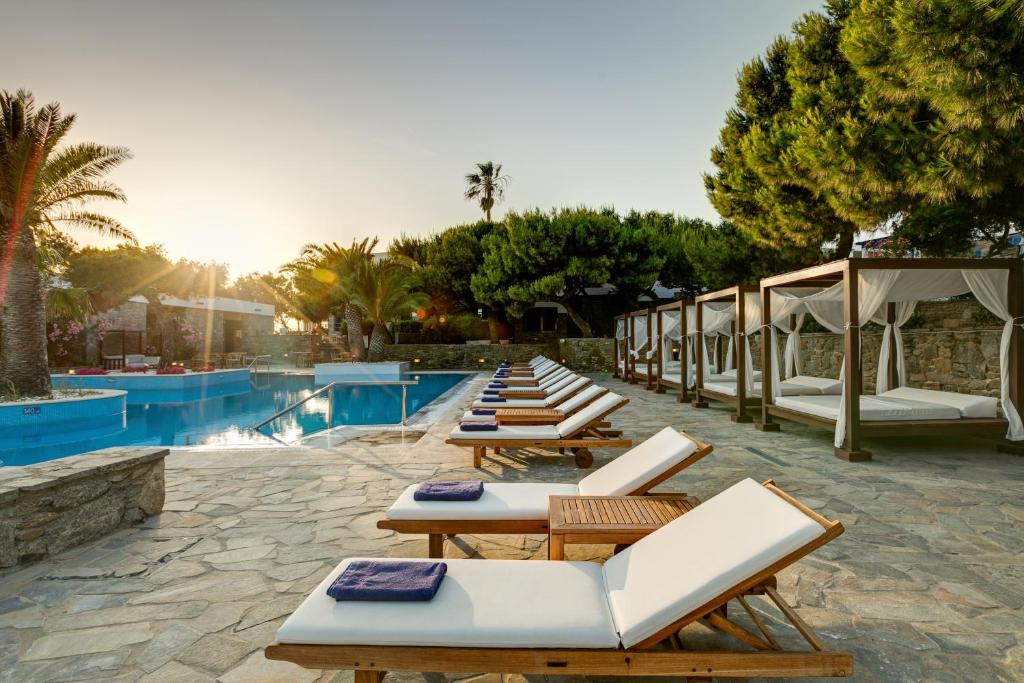 From the hotel you can see one of the most recognizable sights of Mykonos, the Kato Mili windmills, also the scenic Little Venice is just 300 meters from the hotel. Walking to the gay bars in the Old Port of Mykonos will take you less than ten minutes and to the Gay Sunset Bar takes just over ten minutes. The standard rooms are on the small side, the more luxurious room offers more comfort. The ro
MORE INFO BOOK NOW
9.1 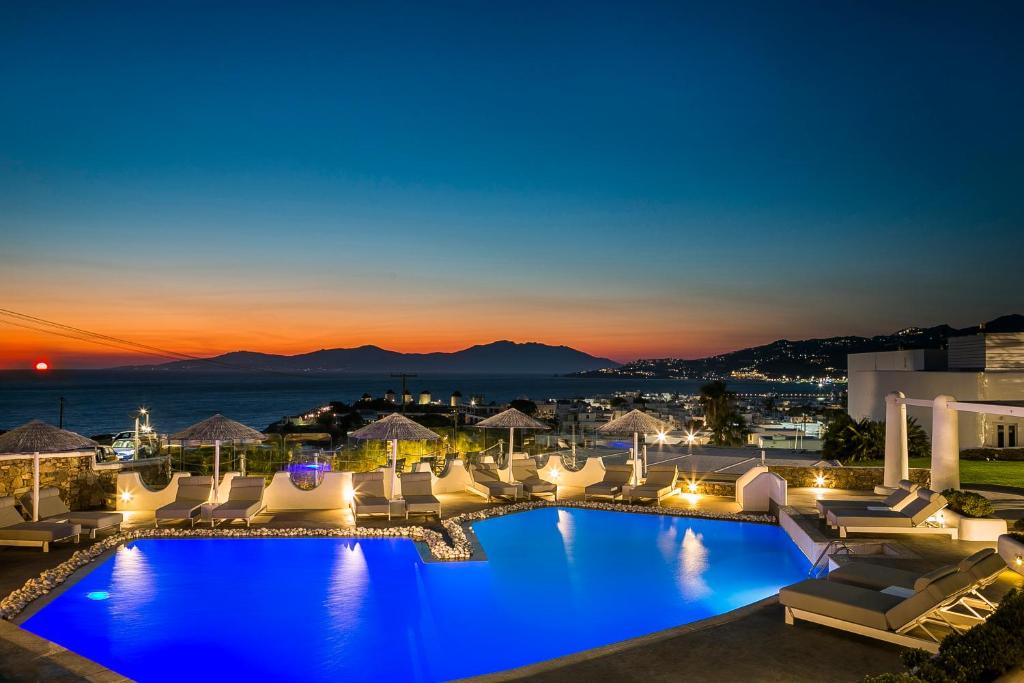 Ilio Maris is a great hotel in the city center of Mykonos City. From the hotel you have beautiful views over the Mediterranean Sea / Aegean Sea. The hotel is well maintained, the staff is very friendly & helpful and the hotel has excellent facilities including a fantastic outside area with sun beds and swimming pool. From the hotel it is a fifteen minute walk to the gay bars in the Old Port of Myk
MORE INFO BOOK NOW € 348 per night
8.8 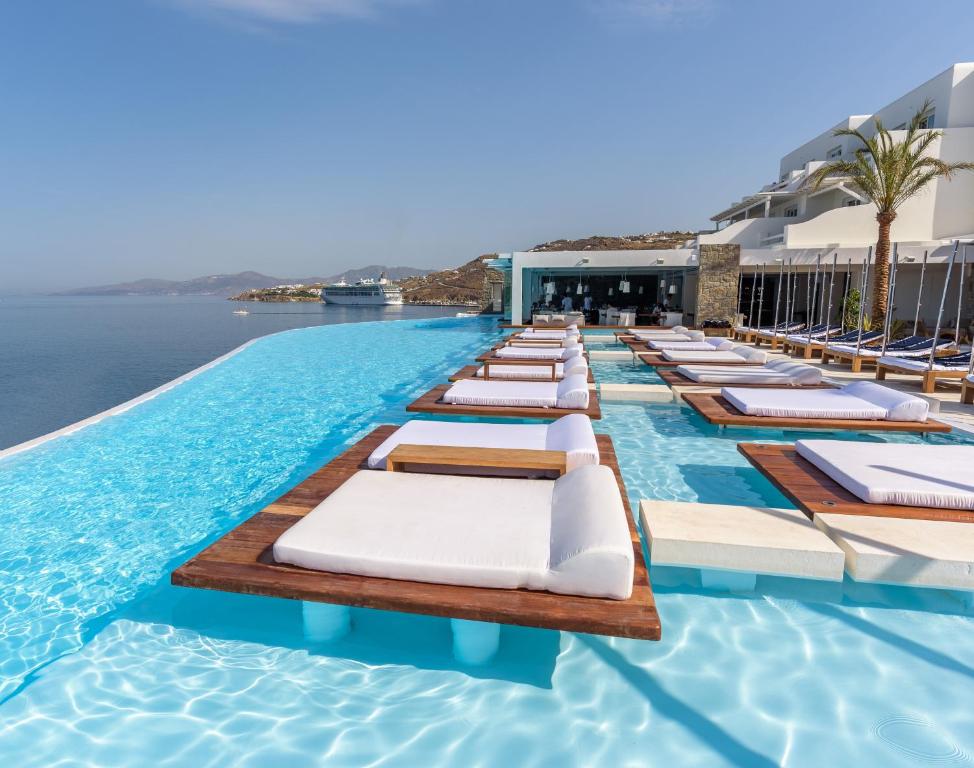 Cavo Tagoo Mykonos is a very luxurious hotel just outside Mykonos Town. From the hotel it is about a 20 minute walk to Mykonos old port, where most gay venues are located, by taxi it will take you 5-10 minutes. Cavo Tagoo Mykonos offers many different types of rooms and apartments. The most luxurious have two bedrooms and a private pool. In addition, the hotel has an infinity pool with stunning se
MORE INFO BOOK NOW € 59 per night
9.7 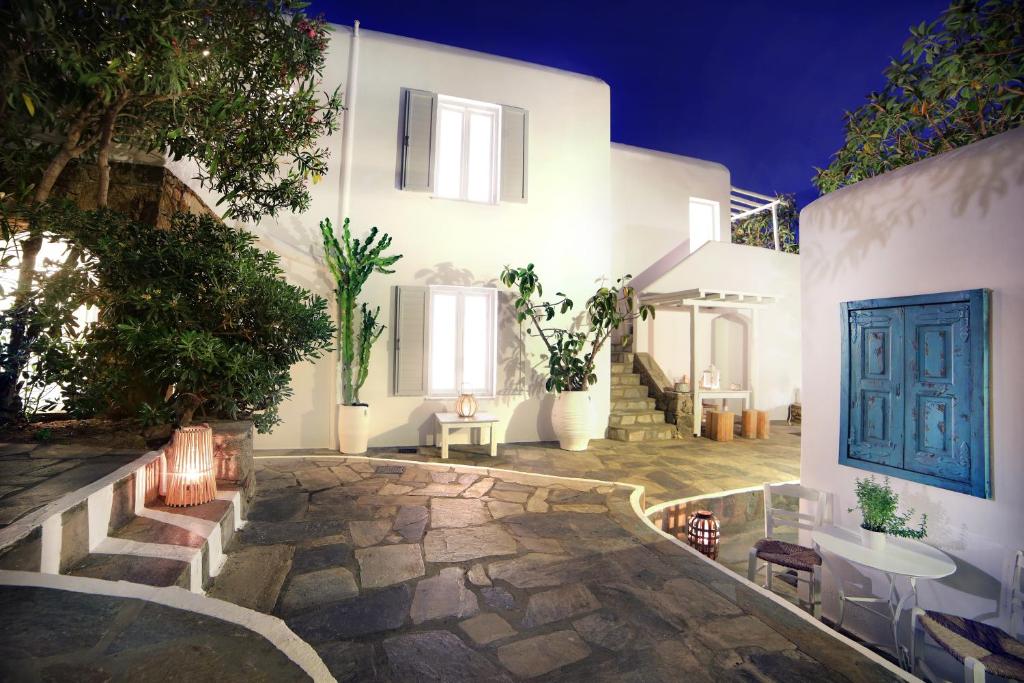 Mykonos Town Suites enjoys a central location in Mykonos Town, just far enough to not be in the midst of all the clubs, bars and restaurants, but not too far to do everything on foot. From the hotel it is a short ten minute walk to the old harbor where gay bars like Montparnasse, Jacky O and Kastro's Bar & Restaurant are located, to the Gay Sunset Bar it is also only a 10 minute walk and it is abo
MORE INFO BOOK NOW € 191 per night
8.6 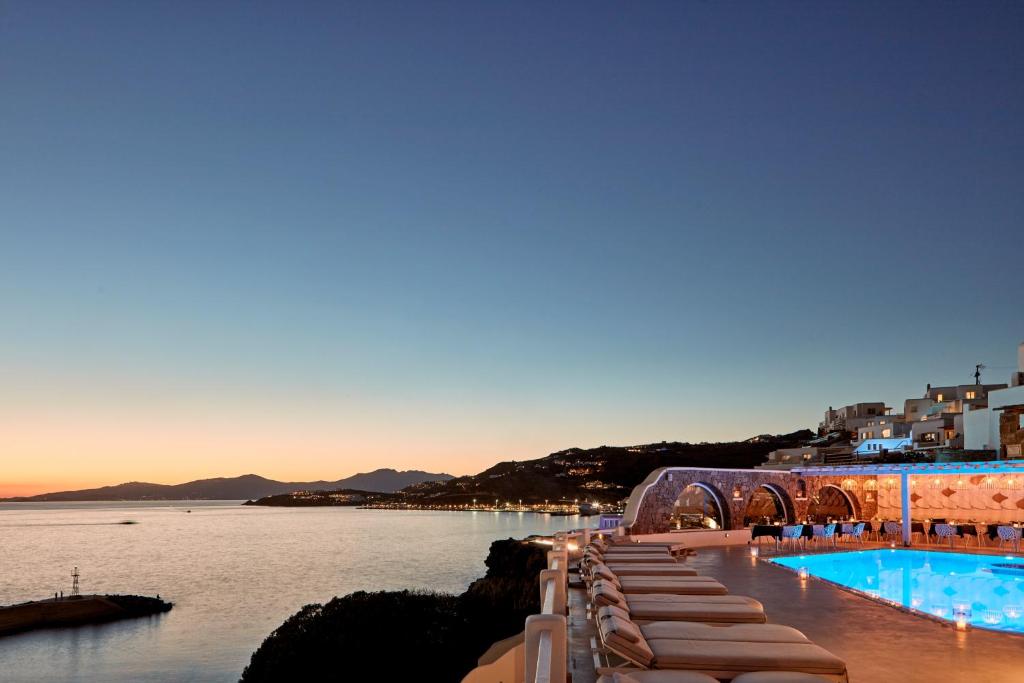 It is around a 15 minute walk from Kouros Hotel & Suites to the old port of Mykonos Town. Here you will find several gay venues. Both to Elia Beach, the most famous gay beach of Mykonos as to Super Paradise Beach, nowadays a mixed beach, will take you 20 minutes by car. The gay beach club, Jackie O 'Beach Club, is also located at Super Paradise Beach. Kouros Hotel & Suites features excellent, spac
MORE INFO BOOK NOW € 181 per night
8.7 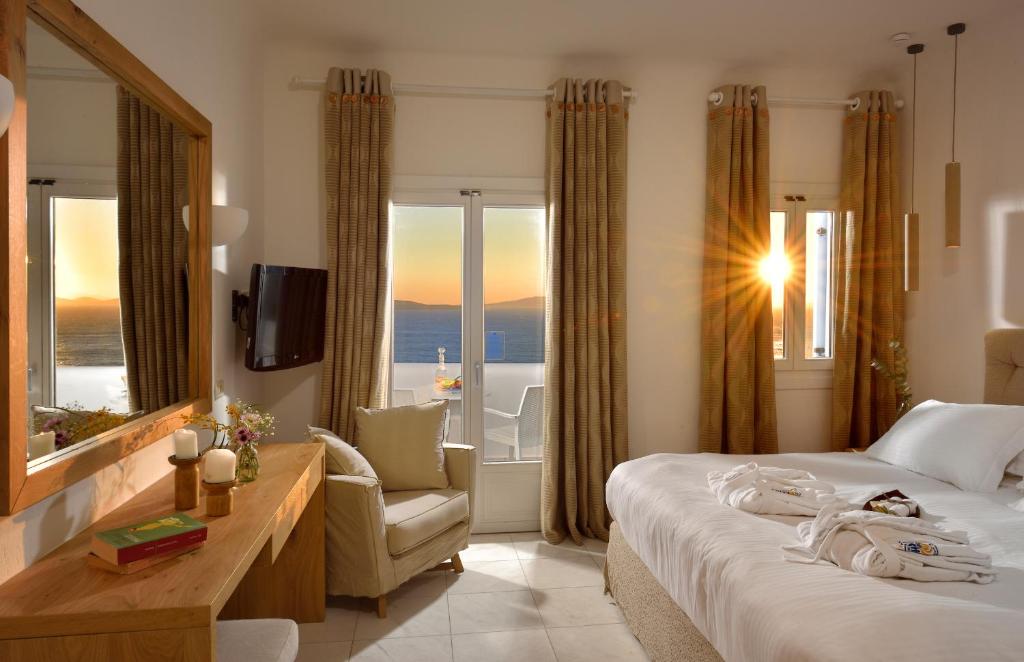 Saint John Hotel Villas & Spa is an amazing resort on Mykonos on a 20,000-square-metre plot. This hotel for gays in Mykonos features an infinity pool with stunning views to the (private) beach. The elegant rooms feature a spa bath, and offer sea or garden views. These beautiful rooms come with many comforts. The resort offers fine dining possibilities with 3 gourmet restaurants, and excellent bars