THINGS TO DO IN VALENCIA

Spain is one of the most popular gay holiday destinations of the world. Barcelona and Madrid are the most popular cities of Spain followed by Ibiza and the seaside resorts of Benidorm and Torremolinos. Valencia is also an excellent holiday destination. The city has a lot to offer, there is a beach, a historic city center, several museums, cultural activities are organized on a regular base and there is an excellent nightlife with a great gay scene. The annual gay pride takes place in June. In the week before the parade several activities, including parties, concerts and a film festival are organized. The most popular beach is Platja de l’Arbre del Gos, this beach is just outside Valencia.

HOTELS FOR GAYS IN VALENCIA

The Caro Hotel features a swimming pool, a bar with terrace and the Michelin-starred restaurant Sucede. The hotel is housed in a beautiful historic building dating back to the nineteenth century, some parts are even much older. For example, there is 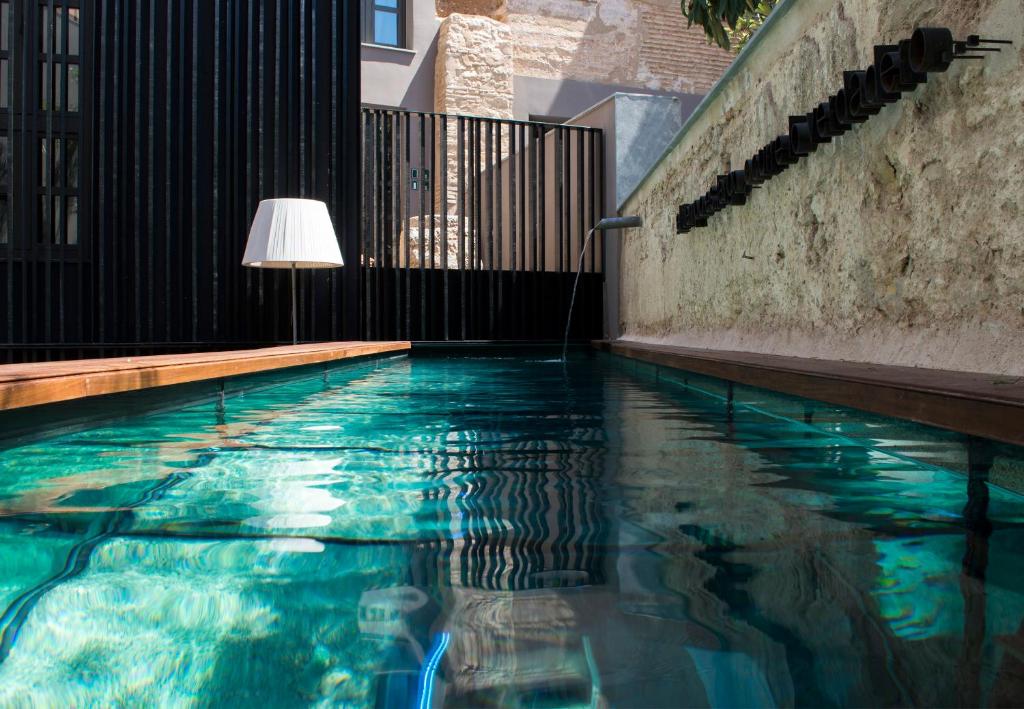 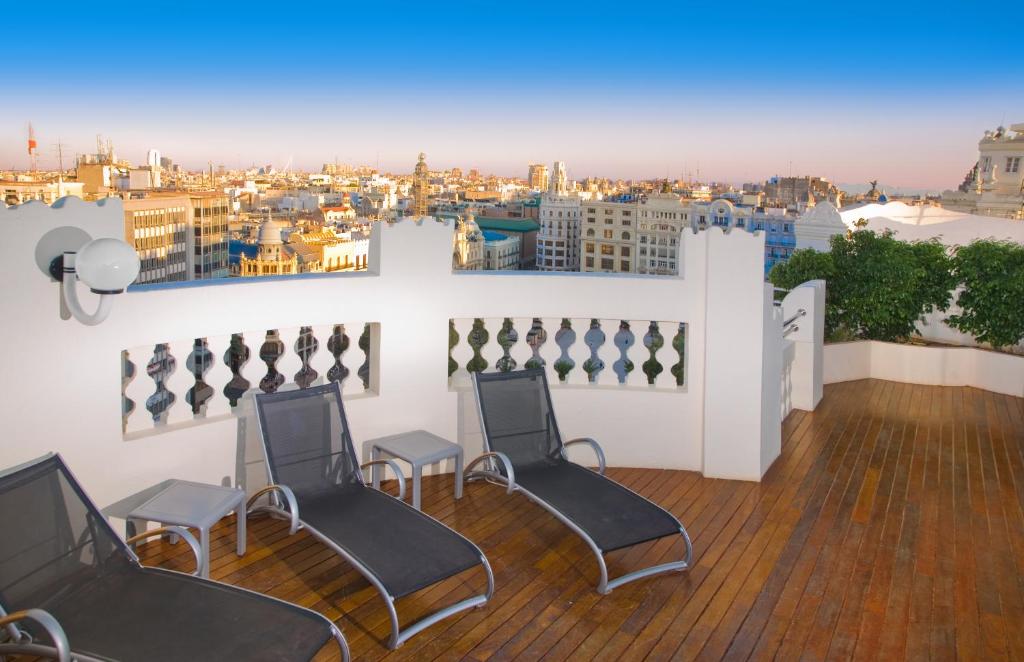 Melia Plaza Valencia is a hotel set in a historic building overlooking Plaza Ayuntamiento. In the hotel you can make use of a gym, a sauna and there is a rooftop terrace with hot tub. At the spacious terrace of the hotel's restaurant you can enjoy Mediterranean dishes and a wide selection of wines. The Rialto, the Olympia and the Principal Theater are within a 5-minute walk of Melia Plaza Valencia
MORE INFO BOOK NOW € 71 per night
8.3 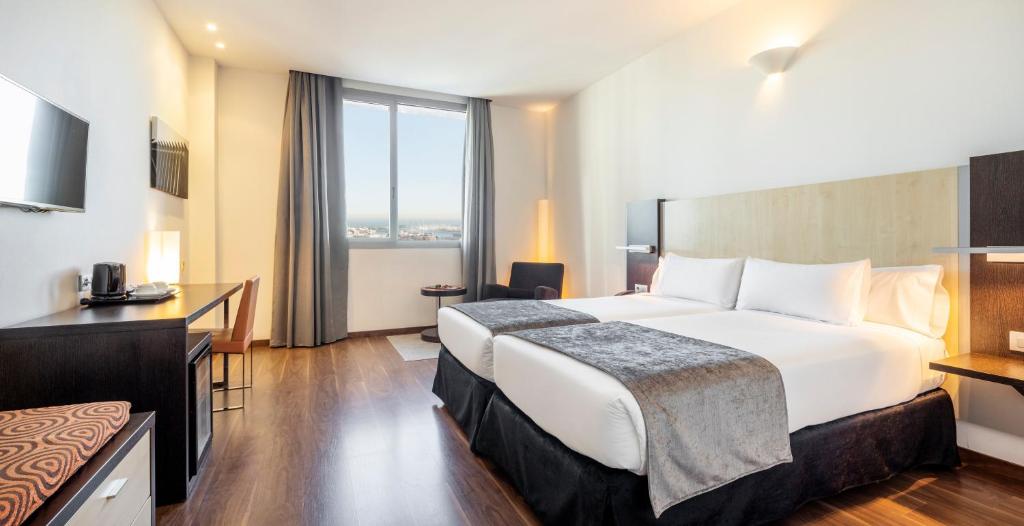 Ilunion Aqua 4 is located at the edge of the city center, a five minute walk away from the museum City of the Arts and Sciences. This museum is set in one of the most remarkable buildings of Valencia. The hotel offers elegant rooms, some of which offer views over Valencia. In addition, there is a gym and an excellent restaurant. The port of Valencia and Malvarrosa Beach are approximately 2.5 kilom
MORE INFO BOOK NOW € 85 per night
8.7 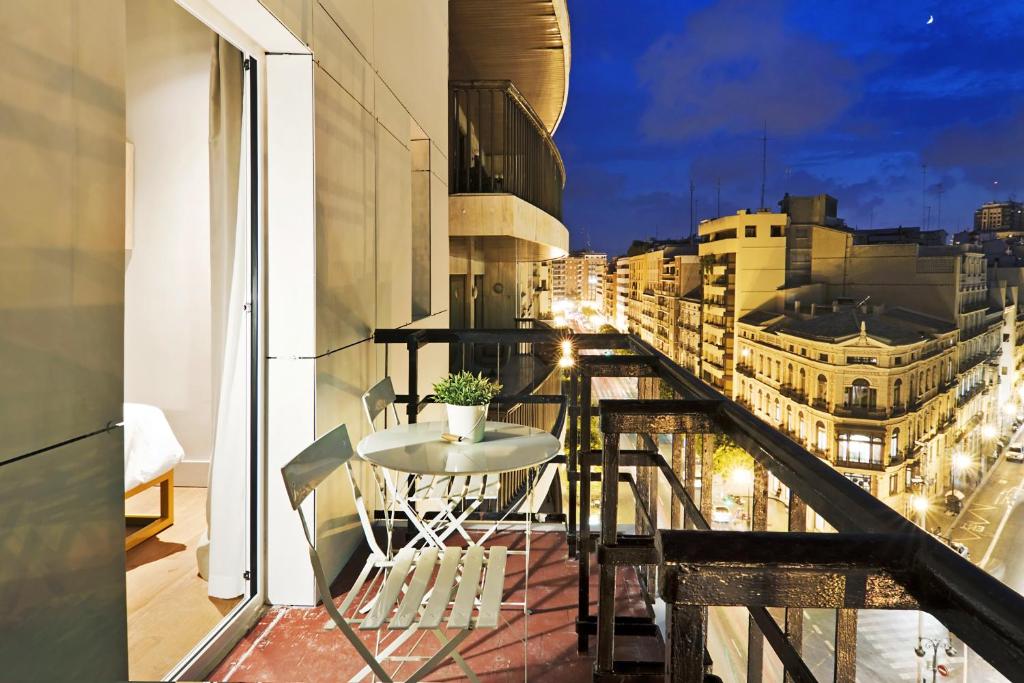 Hotel One Shot Colón 46 is located just 10 minutes from the Valencia Cathedral. The Central Market of Valencia is 900 meters from One Shot Colón 46, while City of Arts and Sciences is just 12 minutes driving away. One Shot Colón 46 offers air-conditioned rooms and free WiFi. It is featuring modern décor, and some of the rooms include a balcony and city views. The private bathrooms come with fr
MORE INFO BOOK NOW € 101 per night
8.7 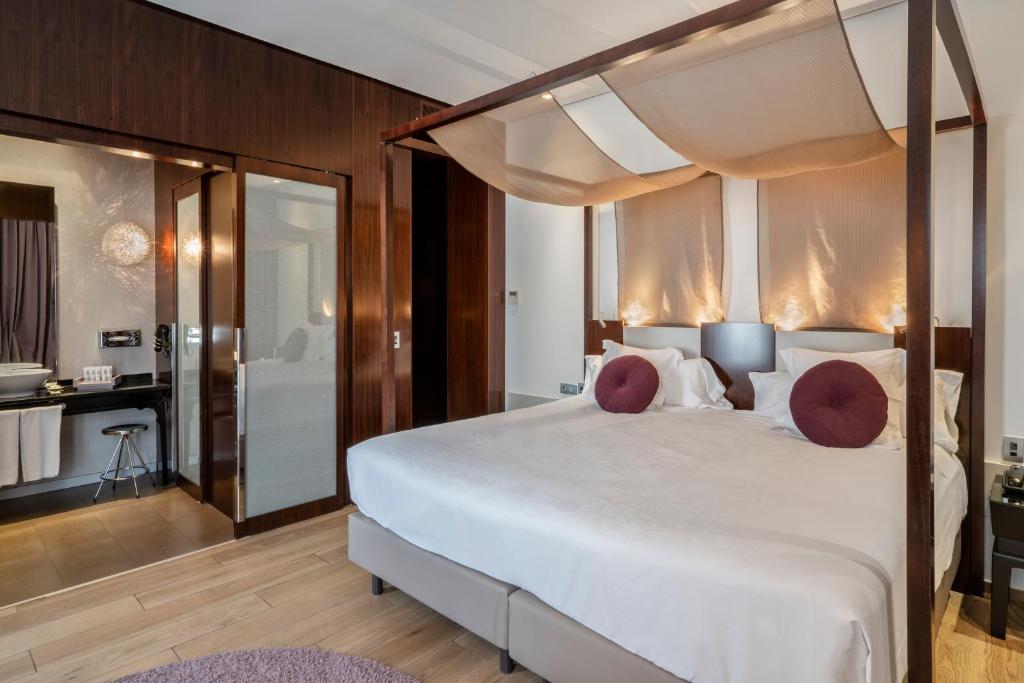 Vincci Palace is a design hotel with stylish rooms and a beautiful terrace. The hotel has a café where you can enjoy snacks and drinks and the friendly staff, can provide you with information about the area. There are two bus stops directly in front of Hotel Vincci Palace, and Colón Subway Station is a 5-minute walk away. The old town, the Cathedral of Valencia, El Micalet, but also the El Corte
MORE INFO BOOK NOW € 119 per night
9.1 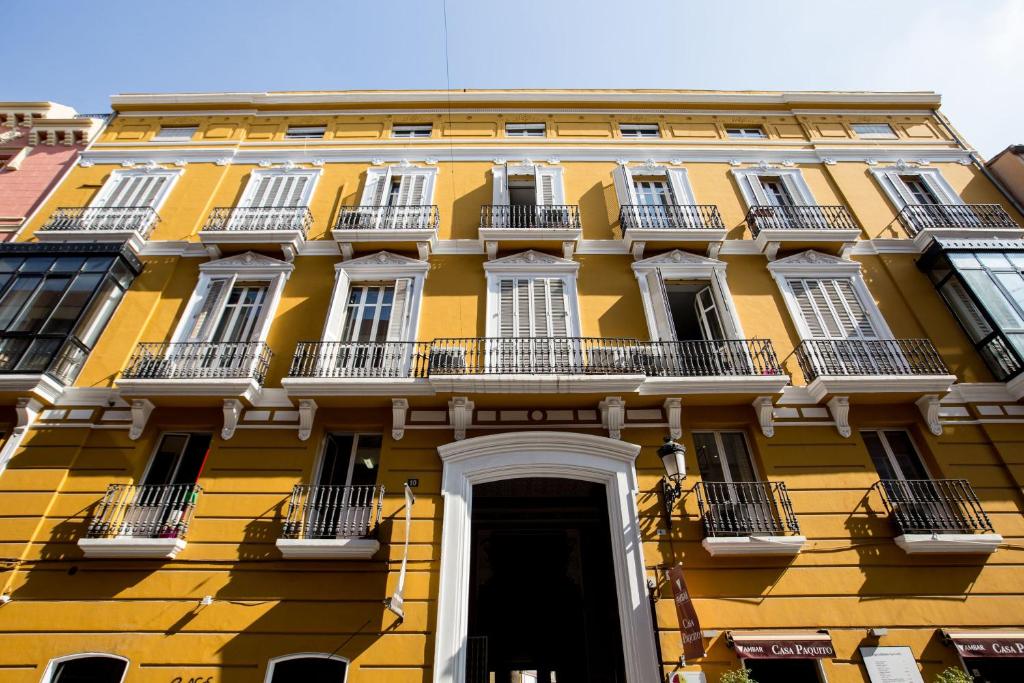 Palacio de Rojas is located in the city center of Valencia and offers spacious apartments with views of the city. You can make use the gym, have a bite in the restaurant and the staff is friendly and has knowledge of the area. To Valencia train station is a ten minute walk from Palacio de Rojas and subway stations Xativa, Colon and Angel Guimera are all within a fifteen minute walk. The Valencia B
MORE INFO BOOK NOW € 70 per night
8.5 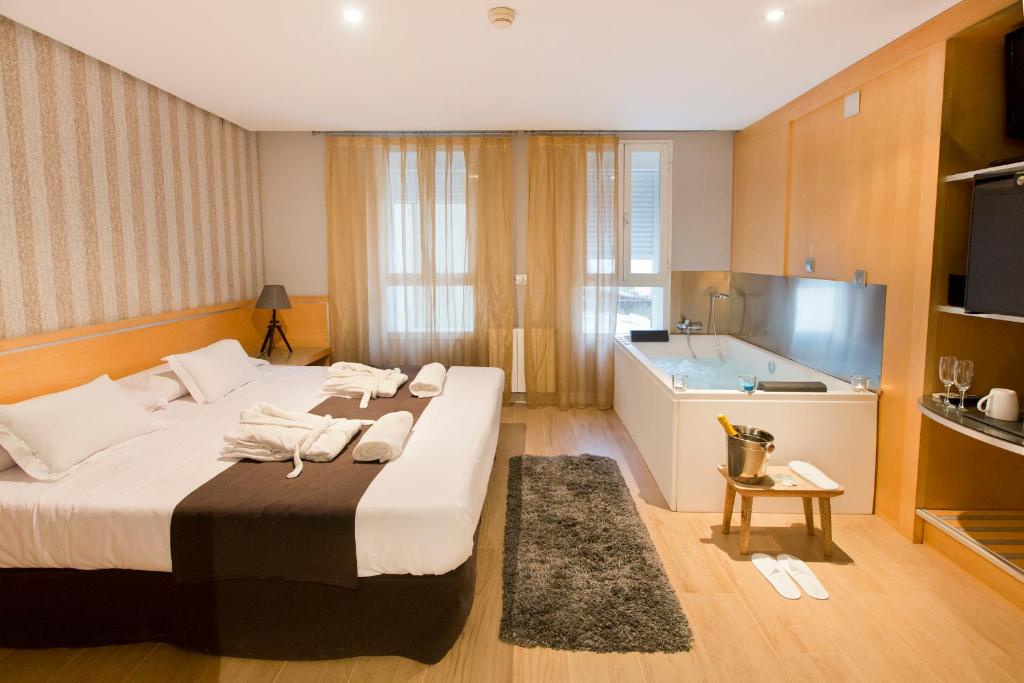 Jardin Botanico Hotel Boutique is a design hotel set in a historic building. The stylish interior is decorated with modern art. The hotel offers spacious and comfortable rooms, some of which have a spa bath. A delicious breakfast is served every day, you can rent bicycles and make use of the airport shuttle services. Jardin Botanico Hotel Boutique is located next to the city's botanical gardens, 6
MORE INFO BOOK NOW € 67 per night
8.9 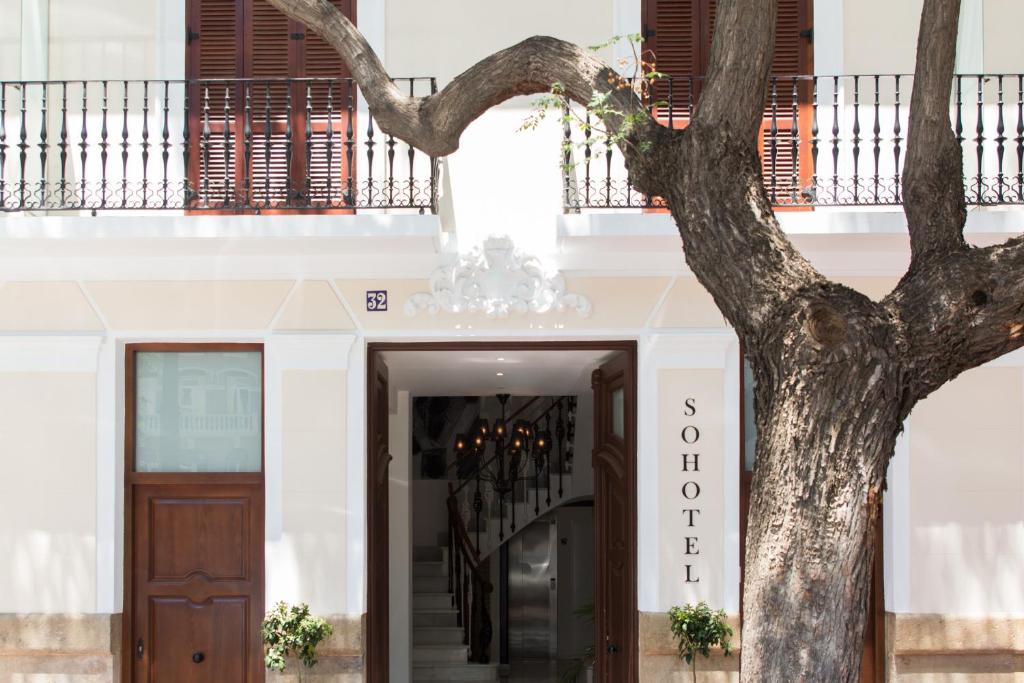 Soho Valencia is located in Russafa, a trendy neighborhood near the city center of Valencia. In this area you will find many restaurants, bars and art galleries. The hotel offers spacious apartments with modern amenities, airport shuttle services and a sun terrace. From the hotel it is 300 meters to the Northern Railway Station and 800 meters to Joaquin Sorolla AVE Train Station. The Ruzafa Market
MORE INFO BOOK NOW € 94 per night
8.8 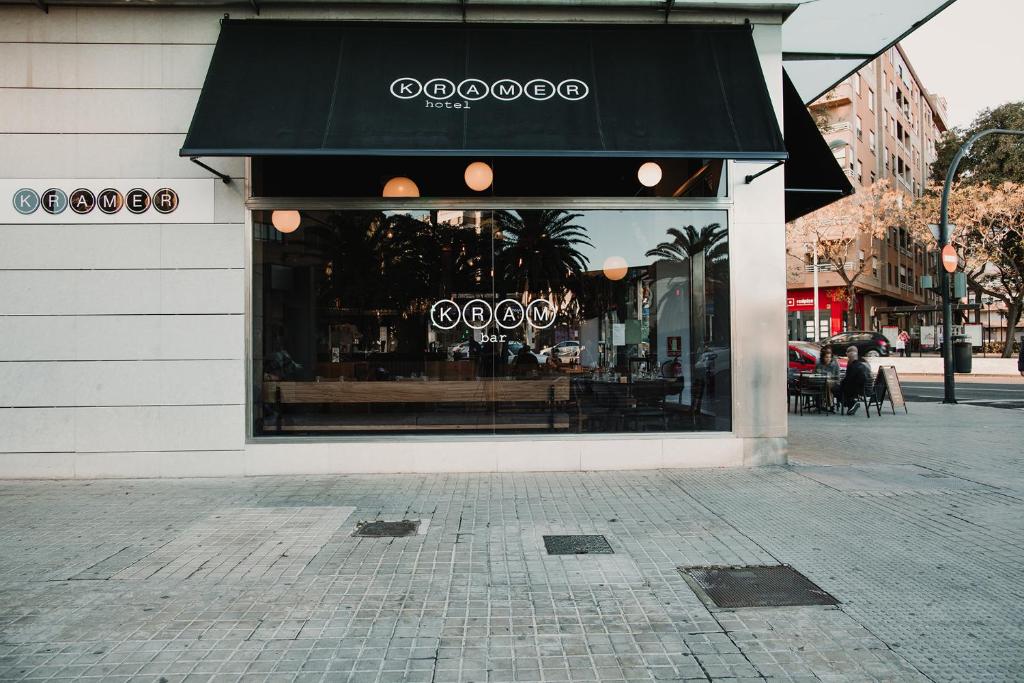 Hotel Kramer is a modern hotel located just outside the historic center of Valencia. From the hotel it is a walk of around 15 minutes to downtown Valencia. The hotel and the rooms are clean and well taken care of. The friendly staff is greatly appreciated by guests of Hotel Kramer. Useful facilities of the hotel are an airport shuttle and the car and bicycle rental. From the hotel it is 300 meters
MORE INFO BOOK NOW € 144 per night
9.0 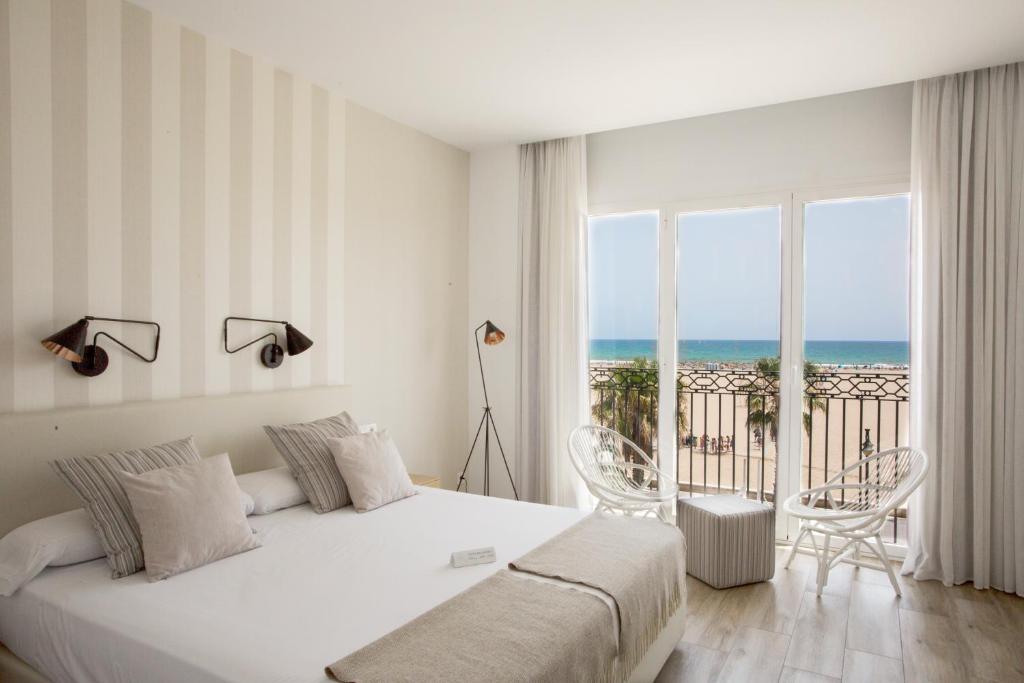 The last hotel on this list is the lovely hotel Boutique Balandret. This hotel is located at the beach of Las Arenas in Valencia. Hotel Boutique Balandret features rooms that are stylishly decorated, equipped with excellent facilities and some of which have sea views. There is a restaurant, a spacious terrace and you can make use of an airport shuttle bus. Most of Valencia's sights are more distan